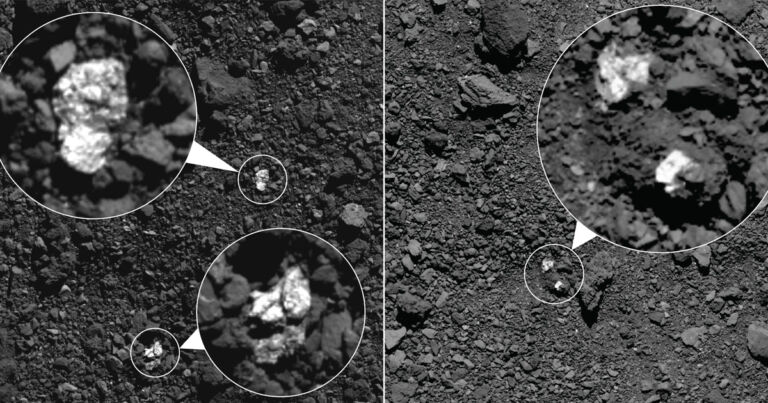 NASA’s OSIRIS-REx spacecraft spotted some strangely light-colored rocks on the surface of asteroid Bennu — and after some investigating, scientists have figured out where they’re most likely from: an entirely different and much larger asteroid.

Since December 2018, the tiny spacecraft has been getting a close look at Bennu, a near-Earth asteroid just short of 500 meters across. In October, Osiris-Rex will attempt to plunge towards the asteroid’s surface to collect a sample.

But during their investigations analyzing a wealth of surface scans, the OSIRIS-REx team found itself puzzled by the strange rocks.

“We found six boulders ranging in size from 5 to 14 feet (about 1.5 to 4.3 meters) scattered across Bennu’s southern hemisphere and near the equator,” Daniella DellaGiustina of the Lunar & Planetary Laboratory, University of Arizona, Tucson, and primary author of the paper published today in Nature Astronomy, said in a NASA statement.

“These boulders are much brighter than the rest of Bennu and match material from Vesta,” DellaGiustina said. In fact, according to scans by OSIRIS-REx’s camera suite, the rocks appeared to be ten times brighter than their surroundings.

Vesta, first discovered over 200 years ago by German astronomer Heinrich Wilhelm Matthias Olbers, is one of the largest objects in the asteroid belt, measuring over 500 kilometers from end to end. Scientists predict it accounts for about nine percent of the mass of the entire asteroid belt.

By analyzing spectrometer readings from OSIRIS, the team found that the light rocks were likely made out of the mineral pyroxene, exactly the kind of material that had been spotted on Vesta and its smaller fragments — known as vestoids — that were shaken loose when Vesta was bombarded by smaller asteroids.

The team concluded it was unlikely the bright rocks formed on Bennu itself, because pyroxene forms at extremely high temperatures. Bennu’s rocks, which contain mostly water-bearing minerals, wouldn’t have experienced those kind of temperatures.

A powerful impact also couldn’t have resulted in those temperatures, either. In fact, such an impact would’ve ended up breaking up Bennu.

Thanks to the discovery, scientists could glean details about Bennu’s trajectory — the way the rock’s orbit is affected by factors including gravitational forces from nearby planets and tiny asteroid impacts.

“Future studies of asteroid families, as well as the origin of Bennu, must reconcile the presence of Vesta-like material as well as the apparent lack of other asteroid types,” Dante Lauretta, OSIRIS-REx principal investigator at the University of Arizona in Tucson, said in the statement.

If everything goes according to plan, OSIRIS-REx will make its first sample taking attempt in October and drag it all the way back to Earth in 2023.

“We look forward to the returned sample, which hopefully contains pieces of these intriguing rock types,” Lauretta added.

READ MORE: NASA’s OSIRIS-REx to Asteroid Bennu: “You’ve got a little Vesta on you…” [NASA]